History of Our Church 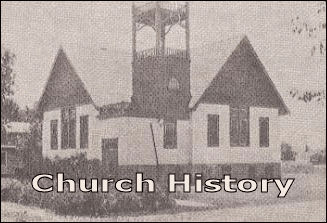 Osseo occupies a part of the level prairie known as the Bottineau Prairie, so called from Pierre Bottineau, who in July 1852 made his claim here. What Bottineau and his companions saw that day was a beautiful prairie, edged by dense woods. “This is paradise!” he said, and the settlement later was called Paradise. The town grew and in 1856 it was renamed Osseo. It is said that Osseo is an Indian name, “Waseia”, meaning “there is light”, although more commonly known as “son of the evening star”.

The village of Osseo was platted in 1856 by Warren Sampson and Isaac Labosiniere. Soon after, another village was laid out by A. B. Chaffee adjoining Osseo on the southeast called “City of Attraction.” This is now included in the limits of Osseo. Osseo remained under the township governments of Brooklyn Park and Maple Grove until the spring of 1875 when it was incorporated.

After many unsuccessful attempts to establish a Sunday school in Osseo, one was finally organized on September 15, 1912 by Rev, McCaslin. Meetings were first held in homes. When attendance became too large they were then held in the Masonic Hall on Central Avenue. Attendance in the new Sunday school grew. The need for a church was soon recognized.

During all of these years there had been no organization of the church. The services had been in charge of a church organization of the Sunday school. After the decision to build a church was made, it was deemed necessary to perfect a permanent church organization. The following Sunday this was carefully discussed and by a vote of twenty-four to four it was decided to organize a community church under the auspices of the Methodist Episcopal denomination.

On May 2, 1922 at the home of Mr. and Mrs. Arthur Dexter, under the leadership of Dr. Kester, District Superintendent, this organization was perfected. The contract for the building was let to Mr. McHeil of Elk River, Minnesota for sixty-four hundred and fifty dollars ($6450.00). Mr. and Mrs. Harry B. Spence donated the land for the building. Ground was broken on May 26, 1922, and the church, located at r Broadway and Second Avenue SE was dedicated on Nov 5, 1922. The pulpit Bible was presented by the Minnesota Bible Society and the flag was presented by the Longfellow family of Brooklyn Center. Rev. Henry J. Soltau presided at the dedication service with Bishop Charles Bayard Mitchell giving the morning address and the Rev. John Walker the evening address.

Church enrollment continued to increase, thus it became necessary to enlarge the building. On Sept 23, 1956, the corner stone of the new building was laid. Rev. Ralph High became the pastor in 1960 and the new church was dedicated on January 8, 1961. Bishop Otto Hall and Rev. Paul J. Snyder, District Superintendent were in attendance. As we continue to proclaim the Good News of Jesus Christ, the church should become an even greater witness for God in the community.